When summer began Hero, the 18-month-old steer was essentially wild.

One of his first encounters with man was to be roped and his testicles cut off. Back with his mother he likely forgot about his loss that day. He never seemed to forget about the evil ropes of doom and wanted no part of the upright beings at the ends of the ropes.

If he wasn’t already bigger than me I could still easily imagine how he felt, so I respected his space.

Before long he connected the rope creatures with food and water. During the next winter he would come running to the gate at feeding time. 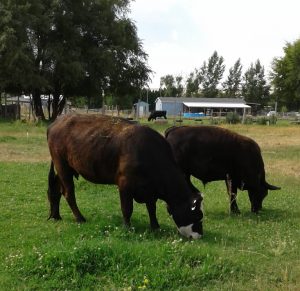 Come spring his mother, “auntie” and “cousin” went away “to live on a farm” leaving him alone in the pasture. Afterwards he gradually became more open to humans.

After hanging around the vegetable garden fence all summer Hero became so comfortable with me he would gingerly nibble from my hand. I came to laugh at how he intimidated me the first time I power-walked the pastures. He pranced along with me, as if coaxing me to frolic with him. 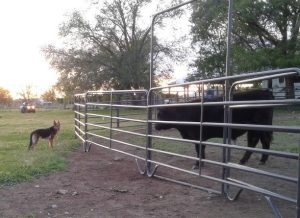 Not long into summer the steer started begging for attention while I groomed the horses. The day Hero literally nosed my arm so I’d brush him too my internal red flags went up.

Hero is not a pet. Cole actually fussed at me for naming him (yeah, he didn’t read that post either). Unlike the horses who summer with us and then return to their people’s pastures for the winter, the steer will relocate to the freezer this year.

For two years I have recited the rule daily: never get attached to the livestock. Even so, something endears me to these bigger beings. I now feel sad when the lonely steer runs to the gate every time he sees me – too much like an 1800-pound puppy.

There were times in my life when I could relate to that steer. People hurt me, separated me from my loved ones and then left me alone and lonely. For a long time I too was very careful of upright beings.

Like the steer and most people I too learned that not all humans will hurt or harm us. Still we must watch for ropes – the things that can bind or hurt us.

Jesus knew about ropes – ignorance, fear, intimidation, greed and plain ol’ meanness. He knew about suffering for someone else’s sakes. With His life He demonstrated the best way to live is to forgive those who hurt us.