My life long friends, Erin and her baby sister Ellie and I hadn’t seen or spent actual live, local face time in about 15 years. With technology one can keep in touch on the phone and internet, etc. But it’s not the same as getting together in the same place, at the same time.

My thirty-something-eth relocation brought about our reunion. These heroines drove a trailer south and east, through wind and amazing hail to collect my belongings and me, and then we three set out on our first road trip in decades. Crossing Texas and New Mexico en route to western Colorado I particularly noticed :

With all of the above challenges, reconnecting with old, family roots makes the entire trip worth any stress leading up to the drive. What feels like home to me:

Playing road tag with truckers (waving, coaxing them to blow the horn). Bonus points for getting one to use a Jake break 😉

At the end of day two on the road I look forward to more adventure and settling in – soon.

“Guard your heart above all else, for it determines the course of your life.” Proverbs 4:23 (NLT)

Two particular things stand out from my recent trip for a family funeral. 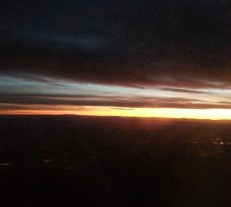 Stormy Daybreak, Valley of the Sun

First is the astounding amount of time I need to resettle after such a trip.

Not long ago we’d take up any opportunity to hit the road. Regardless of my boys’ ages we thought little of grabbing our packs on the way out the door, not knowing when exactly we’d actually walk back in. We’d cross a state line or two for a weekend adventure if for no other reason than because we could. What’s more, I recall only one instance where an eight hour drive through the night rendered me incapable of working my first shift. In all fairness that was the day after my niece took her sweet time being born – 355.7 miles from home at the time. Maybe that was long ago. That niece is married over a decade ago.

Now, days after returning from the last trip I am amazed at how much time has actually passed.

This morning, thinking I had a pretty good handle on things, latte in hand, I sprang to work and immediately felt blindsided by the bulk of email awaiting me, some now six days old. I leaned back in my chair, sipping my steamy, comforting mug contents, listening to the uproar in my head:

This took place mere nano-seconds before I noticed the figure “3” next to the Gmail Drafts folder (meaning something most likely did not go out as I thought before I left for the airport).  A loud scream, initially remote, rapidly pierced its way to my frontal lobe, nearly breaching Central Dispatch before I arrested it, saying instead, “Voithos, where are you?”

Though I actually had internet access the entire time I was away – time away with family being the operative term. Such occasions happen rarely in our circles, so they’ve moved up the priority scale dramatically. This morning I sipped, calculated and reminisced events of the past two weeks. I determined to break tradition, and not stay at the laptop until all two-hundred and some-odd items were opened and sorted, and then take time to catch my breath. That memory alone made my neck and shoulders stiffen.

I decided upon the well-considered, conscious choice to sort all email into three categories (four including the Drafts folder) to address after I returned from a walk and shower with  a fresh pot of tea:

Folder 1: Stuff to open first to avoid apocalyptic catastrophe (stuff that could cost me money),

Folder 2: Stuff to deliberate over after sorting through Drafts and Folder 1,

Folder 3: Put other stuff here only if doing so won’t cost me money,

Folder 4: WordPress notifications. Get strong coffee, and then proceed.

The second thing that stands out is the very many gatherings with my siblings, cousins, aunts and uncles, nieces and nephews where we all emphatically agreed we must get together before another funeral summons us. At our advanced age, as approximated by no sign of our elders (until passing a mirror) and the horde of young people that look only vaguely familiar now, we should not press our luck as to when that gathering will happen.

So, dear readers, this post is not only me checking back in, but is also my figurative gauntlet  gently on the grass before my dearest relations. I shall again attach a link to this post in another round of family emails reminding us all that tomorrow is not promised. We must set a date.

I’ll get back to you on that.

Russellings of the Spirit