More Than a Walk

Stepping out from my warm cottage the temperature changes were exhilarating. Looking up at the buildings as I passed, I shivered, but not from the cold.

When the weather warmed up and then cooled again large, ominous icicles formed. After it warmed again the snow cover began sliding down and some of the frozen daggers began randomly dropping.

As I walked I imagined cold, heartless creatures silently creeping after me.

Then I realized the frozen bars were a covert plot to imprison me within the darkness indoors.

I felt the cold and gloom pursuing me. My plans, hopes and aspirations began to appear insignificant, worthless. Even the sunshine seemed like a distant memory.

But looking up on my mid-morning stroll God’s beautiful heavens assured me the malefactors were only in my mind.

I am a child of the Light. God rescued me from the shadows long ago.

Together we banished the mood.

As we returned to my comfy home, above the crashes I heard His voice stirring a breeze, whispering, “Hear it? Spring is coming…”

“Where can I go from Your Spirit?
Or where can I flee from Your presence?
If I ascend into heaven, You are there;
If I make my bed in hell, behold, You are there.
If I take the wings of the morning,
And dwell in the uttermost parts of the sea,
Even there Your hand shall lead me,
And Your right hand shall hold me.
If I say, “Surely the darkness shall fall on me,”
Even the night shall be light about me;
Indeed, the darkness shall not hide from You,
But the night shines as the day;
The darkness and the light are both alike to You.”

Filed under Notes from the Apex, photography

This Can’t Be Good: Part III

I can’t make sense of it. I feel as though I can not wake from the strangest dream – a nightmare. All week long I looked and waited for my friend, trusting we will find each other. And yet, I shared the Passover meal with strangers at an inn.

On my way to the temple, desperate to find my friend I had to wait for the ugliest parade procession ever. That guy people talked about all week, paraded through the streets. He was beaten so badly I barely recognized his gruesome image, barely able to drag his cross. Days ago a celebrity and now being treated as a criminal. Some of the same people I saw celebrating him earlier were mocking and accusing him of some vague crimes.

It’s as if people have lost their minds. How I wish I knew what has become of my friend.

Hardly anyone at the temple, I felt lost and desolate. The week certainly did not go as I expected or would have imagined. I wandered aimlessly until I came to the city wall and looked over the countryside. I saw the crowd dispersing from three crosses, a man hanging from each of them. Too far to see clearly, I am certain that guy, that Jesus in the middle. I knew he was in for trouble. But this… Bewildering.

As I looked on from the wall, the sky seemed to fracture, the earth shook and the world became as dark at night. I was horrified. I lost all track of time. Then all I could think of was to get to the inn for the night.

Confused and shaken, I made my way not remembering how I got there or anything I said. Overwhelmed by the images in my head, the strange, dark weather, the hideous feelings, all I had seen, chilled to the bone despite the warm day, I felt entirely alone among the strangers around me.

I don’t understand. I have done my best to be good and worshiped God as long as I can remember. And yet I wonder if I had only imagined this God. This week seems to be too much for me. I must be tired. I must rest. But I can’t shake the picture of the crucifixion on that hill. God, please help me.

“Who may worship in your sanctuary, Who may enter your presence on your holy hill?”

“Christ redeemed us from the curse of the law by becoming a curse for us, for it is written: “Cursed is everyone who is hung on a pole.” Galatians 3:13 (NIV)

I didn’t realize it at the time, but looking back I now marvel over how quickly I’d reacted.

In the moments leading up to reaching my coffee pot I went from motivated to a mess. And I admit, I wanted a villain, someone to blame for my upset, let alone the difficulties that were certain to snowball.

Yes, friends, although I kept my bright red espresso grind coffee container out on the counter for two days – for the sole purpose of reminding me I must grind more coffee – that morning the stark reality that I’d entirely run out of coffee blindsided me.

It got worse. Not only was the strongest caffeine source in my kitchen some aged (however delightful) white tea, Deadline had advanced from the shadows of the cottage and towered over me, sword drawn over it’s obnoxious head. Annnd we had a villain …

This was quickly developing into one of those emotion/hormone-packed, full-on-drama mornings. I had already suspected that in hindsight I would wish to somehow erase it all from the eternal hard drive as if it never happened. A wise woman would have paused the whole day there. Not this one. Not that day.

Still, two mornings back I’d added coffee to my Needs Now List. For the subsequent forty-eight hours I planned my run to town between breaks and staring blankly into space. I try to economize wherever possible and make the most of the trip. This usually works very well. Until it doesn’t. Until that morning.

So, there I was, bravely forging onward sans caffeine, thinking I had a good handle on everything within my ken. Strangely predictably, it became the worst morning ever, something unexpected had happened. Forget happened – I felt like someone hit me across the abdomen with a five-foot long 2 by 4.

The car was gone.

Duh – duh!!  {Roo jumps behind the wall as if sensing a predator nearby, but seeing and hearing none, she then lets out a loud, agonizing shriek, “Why God? Why, without coffee?! scaring away any other life forms from the area…}  Okay, I sighed deeply but imagined screaming loudly.

The Lie: Brother doesn’t actually give a care about me.

Reality: The evening before Brother had used his vehicle (ahem, that he keeps mostly for my use), parked it in the back of the lot, and then forgot to press “send” after composing a text to me. Therefore, I didn’t receive his text advising me the night before.

Reality Check: Even though Brother’s mordant veneer momentarily confuses me and annoys me often (like most siblings I know), he also surprises me with thoughtfulness and sensitivity on occasion.

Granted, me without morning caffeine is scary, but it is not the end of life as we know it. Not hardly. However, for those few minutes that morning, before the exchange of texts set me back on track, I had wasted a morning’s worth of energy being extremely upset. A black hole sucked a huge chunk of my life away from us – over nothing.

Later, with a triple-shot/double vanilla latte in hand, I took a time-out with God. Deadline would just have to chill. After some needed time by the riverside I was actually glad for that wake up call. 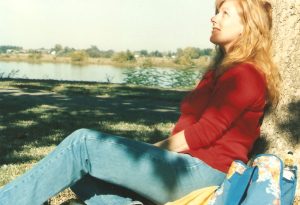 There God showed me that with my roots now beginning to unwind I have a better grasp of life than ever before. And yet,   occasionally I jump to conclusions, assume the worst, and quickly follow with the big-ol’ lie at the core of it all that God really can’t care for me.

My eyes watered from what felt like a stinging punch in the face. Seriously, I checked for blood. Finding none, He then went on past my faults, deep into my needs. He showed me I have indeed come a long way in every facet of my life. Even so, I lived so long in darkness, ignorant of His love for me, we must also allow for time to adjust to light. Whatever my degree of healing, I was severely damaged back then and I am still quite human now.

He noted how I now recoil far less frequently than ever before, that I now voice my upset feelings too – mostly appropriately. Then He assured me that some day soon fear, sorrow or anger will not overtake me with the mere thought of darkness. Then I’ll have learned to respond rather than react.

God says so. While I continue to trip up, and can’t feel it yet, I can believe it.

“Now faith is confidence in what we hope for and assurance about what we do not see.” Hebrews 11:1 (NIV)

I can believe it for me as well as for my siblings, other brothers and sisters on their healing journeys.

Today you and I are the only ones to know how short-sighted and down-right silly I was earlier. Shhh…

“Because of our faith, Christ has brought us into this place of undeserved privilege where we now stand, and we confidently and joyfully look forward to sharing God’s glory.” Rom 5:2 (NLT)

Russellings of the Spirit