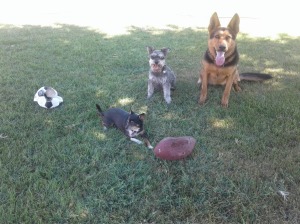 About six months ago our ranch family began to grow exponentially.

First Cole rescued GoodGirl to ease the pain of Scout passing away. Weeks later SchnauzerOne and ChiuyTwo found their new home here as well. I’m no hater, but I’ve never been a huge fan of “yappy dogs.” Familiar with both breeds I was reluctant to take them on.  Still, their person suddenly passed away. I couldn’t refuse the older dogs any more than Cole could. Who knew they’d win me over – and so quickly?

So months later, the dogs and I spent the first weekend alone together in months. It had been over a week since all three dogs accompanied me through outdoor chores. As usual, I kicked a toy around for them as I moved hoses, checked sprinklers and topped the water tanks.

After the second fracas over the toy I crated the dogs to calm them. Once calm, I released them one by one and then ran them hard around the grassy yards. Having them “take a lap” worked well to help my adolescent boys sharpen their perspectives (and attitudes) – some things just don’t change.

I also added another (very flat) ball to the arsenal, allowing each dog a favored toy. Soon I noticed ChiuyTwo isn’t as interested in chasing the ball as she likes being drug from it (how I wish I could have captured that shot). SchnauzerOne doesn’t care as much about the ball as he loves the chase, and GoodGirl is passionate about playing Keep Away. 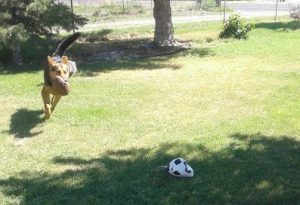 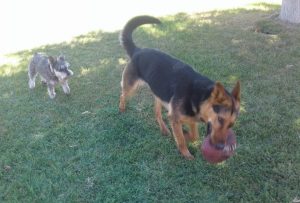 Soon we had a Football-Futbol game.

Before long endorphins rocketed through all three dogs till none actually cared who had which ball – if there was a ball in play at all! I added a gentle sprinkler and the excitement was off the charts. 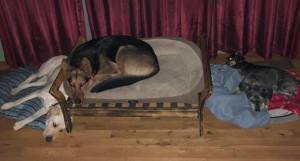 Later while listening to reports about the immigration situation I reflected upon the Football Fireworks. All three of these dogs were in dire situations when they came to the ranch. They all needed a safe place to get their heads around what had happened in their individual lives, recuperate, and then make the best of it all. All three are confused about who they are now, what they want, and yet we all want to enjoy our home.

Sure, many other tasks awaited my full attention that day and I could have simply crated the dogs and ignored them. But these dogs are usually great companions and they sometimes help with the chores.

It wasn’t easy. It often isn’t. And yet we found a way to not only make the morning nice, but enjoy each other’s company the rest of the weekend.

I may be simple and unsophisticated, but I wonder if we could all learn some new tricks from flat footballs.

“Never pay back evil with more evil. Do things in such a way that everyone can see you are honorable. Do all that you can to live in peace with everyone.” Romans 12:17, 18 (NLT)