Morning came far too early for my body’s liking. I’d overdone my workout again and paid the price for days; not resting sufficiently, stiff, sore and reluctant to move, moreover get out of bed.

I pushed myself however and made my way to a comforting, steaming mug.

Checking in at my desk:

Hmm… I checked the news:

With the third strike in the day’s first inning, I set out for a walk.* 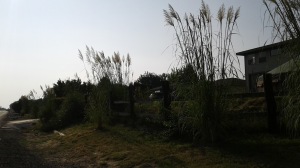 After I realized I wasn’t actually praying I stopped mulling over my whine list with God. Instead I began thanking Him for everything I could see.

That’s when I heard her. Before I could see her I sensed her excitement. I was barely half way to the barn as the familiar squawking drew remarkably closer with my every heartbeat. For the first time in weeks, Silly Suzy had flown over the fence and was wobble-running to me as if for dear life, clucking loudly every step of the way. 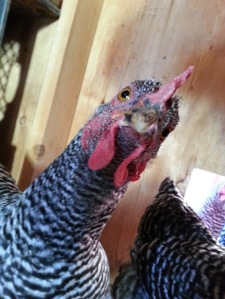 Without my glasses she looked as if her very slightly raised wings were holding a skirt high enough to not drag in the wet soil as she hurried along.

I tell myself she’s so happy to see me because she’s very fond of me – it has nothing to do with me bringing fresh food to the coop every morning. I squat down low, despite the increased ache – she all but jumped into my arms so I could carry her back to the fence, letting her flutter down with the rest of the brood.

The less adventurous hens fluttered and squawked making way for her stuttered– 3-point landing. I’m sure translated she reported, “See there, I told you Old Dog’s gone,” before they all settled back into routine. As I walked away Rooster crowed a hearty “Thanks for restoring the peace.”

Rejuvenated, my pain levels vastly decreased from the extra movement, I returned to the cottage ready to work. For half an instant I thought about a comment First Born had made recently,

I pray that years from now, after the grand kids leave home, friends and siblings are far too busy to pop in several times a week, First Born will have chickens – with at least one Silly Suzy.

I want to imagine a world free of haters and ignorance. Today it’s very hard. But it will happen.

Neither Erin nor I heard the terrifying news, but we felt something horrible had happened. We continued to feel the oppression as we drove through the amazing Colorado Monument – even that majesty couldn’t shake our uneasiness.

This morning we felt it even deeper, even before hearing the news. Now we understand why. Humankind suffers horrifically again. Neither my feeble words nor my faith will undo the damage done. And yet I live in the hope all our cries to God help someone, somewhere somehow.

There’s no way to express my compassion for the families and friends of those lost and those suffering from this Sunday in Orlando, Florida. But I try.

Regardless how feeble we may feel in the aftermath today, love overcomes evil.

With deepest, heartfelt sympathies to all those who feel each loss, for the communities, friends and families and all of those suffering now.

“When I think of all this, I fall to my knees and pray to the Father, the Creator of everything in heaven and on earth. I pray that from his glorious, unlimited resources he will empower you with inner strength through his Spirit.” Ephesians 3:15, 16 (NLT)

Filed under Notes from the Apex, Uncategorized