Why are you mad all the time?

via Why are you mad all the time?

As the week winds up and we lounge together by the pool in Chicago Land, I thought about The Leak.

From August 7, 2016 on Colorado’s Western Slope via Leak:

Two-plus weeks ago Erin and I took a break from our projects. While her sister Ellie, her family and their brother Edmund traveled to check on another property out of state, Erin manned Ellie’s house, the 5 small dogs and the cat.

I held down our home front. I’d intended to take a break from the downstairs project downstairs and check off the list of small tasks upstairs.

About midway through our sideways vacation I went downstairs for something I had seen that would be perfect upstairs.

Ordinarily I avoid going downstairs without Erin. I can go from zero to sensory overload in 06.1 seconds over the astounding collection of vintage items from 3 generations of her large family – all being sorted and repacked. Have I mentioned the fifty pounds of stuff on a ten pound property including the garage?

When I first arrived I enjoyed revisiting her things I saw growing up. But after sleeping on a futon for over three months (haven’t made a path to the bed yet), I now easily lose focus and my attitude can spin out of balance very quickly. Frequent, very fervent prayer helps. Still, I wanted to surprise Erin when she returned. I kept looking.

As I descended the stairs I told myself storage naturally smells musty, and dismissed what I thought was exceptionally dank air. But then I noticed the bottoms of some cardboard boxes were noticeably dark. Stepping cautiously into the room I heard and felt my feet squishing into the old carpet.

Houston, we have water.

A phone call and an hour later Erin and I teamed up to extract water. We couldn’t cut the water at the main until we found the leak.

So I became G. Annie Roo, super sleuth. I like the sound of that.

Without Edmund the fix-all brother we became very resourceful, reducing trips up and down the stairs. The following day we finally we discovered the cracked pipe. Ta-da!

Over the following week we tossed water on the lawn from bowls we filled with recycled milk jugs. Between that move, we replaced and repacked wet boxes. We were thankful to learn the 3-inch hole in the old cast iron drain is exclusive to the kitchen. We are not happy to learn the broken, slightly sunken concrete driveway outside the kitchen wall suggests a bigger problem. This whole project might take a while.

The contractors are due to arrive soon. By then we will have settled into our adjusted routine and used the better part of a tree for disposable dinner ware 😦

So goes this week’s episode in the continuing saga of two old broads rehabilitating the vintage family rental. Were the property owner any other than Erin’s mom we would have taken another, less laborious course. As it is love runs deeper and for now the futon awaits me.

“If I speak in the tongues of men or of angels, but do not have love, I am only a resounding gong or a clanging cymbal.” 1 Corinthians 13:1 (NLT)

They can appreciate some cooler thoughts in the Tri Cities this week, so

Dawn broke despite my slumber.

I rose and bolted, then watched the moon lumber.

I ran to catch up with the day.

Then I stopped; some clouds had swept the moon away! 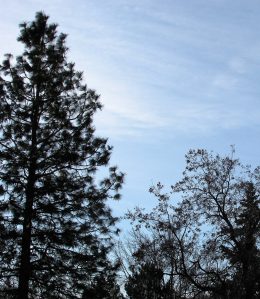 “Each time he said, ‘My grace is all you need. My power works best in weakness.’ So now I am glad to boast about my weaknesses, so that the power of Christ can work through me.” 2 Corinthians 12:9 (NLT)

Another spark of light from our blogger friend Persia:

If you light a lamp for someone else, it will also brighten your path. Unknown Have a blessed day all.