To clear my head from the hard weekend, I shifted gears and started my work day at the WordPress Reader. Checking in on the blogosphere community lifted my spirits, as usual. My prayer time enhanced, perspective improved, I noticed the common thread – we are shaken. 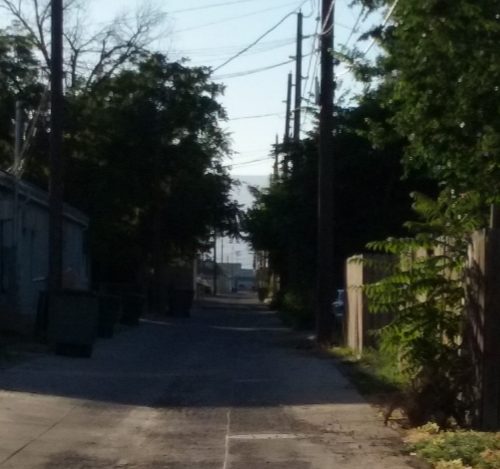 Later, during my first hourly circle around my block, a figure stole my attention – of someone sitting on the ground a few feet into the paved alleyway, head bowed, quietly weeping. The person looked like any of the numerous street people who frequent the avenue north of the street on which I live. Ordinarily I would have passed on by, but something about her stirred something in me.

Following my gut I stepped closer, asking if she needed help. With a sweep of her arm she waved me away, but I clumsily persisted. Reluctantly, she said she had just heard about the tragedy in Orlando.

Again, I recalled the scenes from Monday’s newscasts and held back my own tears. Awkwardly I blurted out, “I know how you feel.” To that she turned her head toward me. From the long, tousled hair covering her face I heard, “You don’t know what you’re talking about.”

Impulsively I sat down on the pavement next to her. In due course I said, “Maybe you’re right, but I’m horrified just the same.” Surging with energy I felt uncomfortably feeble, not knowing if the stranger understood I referred to Orlando, and not my sitting by her. My mind became a blank slate. She didn’t respond. I simply sat there.

I silently asked God for direction, but heard nothing. And yet, I began to feel conspicuously at ease. We sat together in silence. Well after my tail end went numb, she wordlessly got to her feet, her head still low, and she walked away.

Fumbling to my feet I watched and noticed she didn’t look back. After the dozen-plus steps she turned the corner toward the busy street, out of view. Scant moments later I resumed walking the same direction. When I rounded the corner she was nowhere in sight.

I can’t tell you what the time meant to her. I continue to pray she’s not alone – not in her feelings or in the world. Hours later, I now wonder if angels also weep.

“Don’t forget to show hospitality to strangers, for some who have done this have entertained angels without realizing it!” Hebrews 13:2 (NLT)